Watch | Business valuations in financial remedy proceedings – at last a science rather than an art?20 July 2022 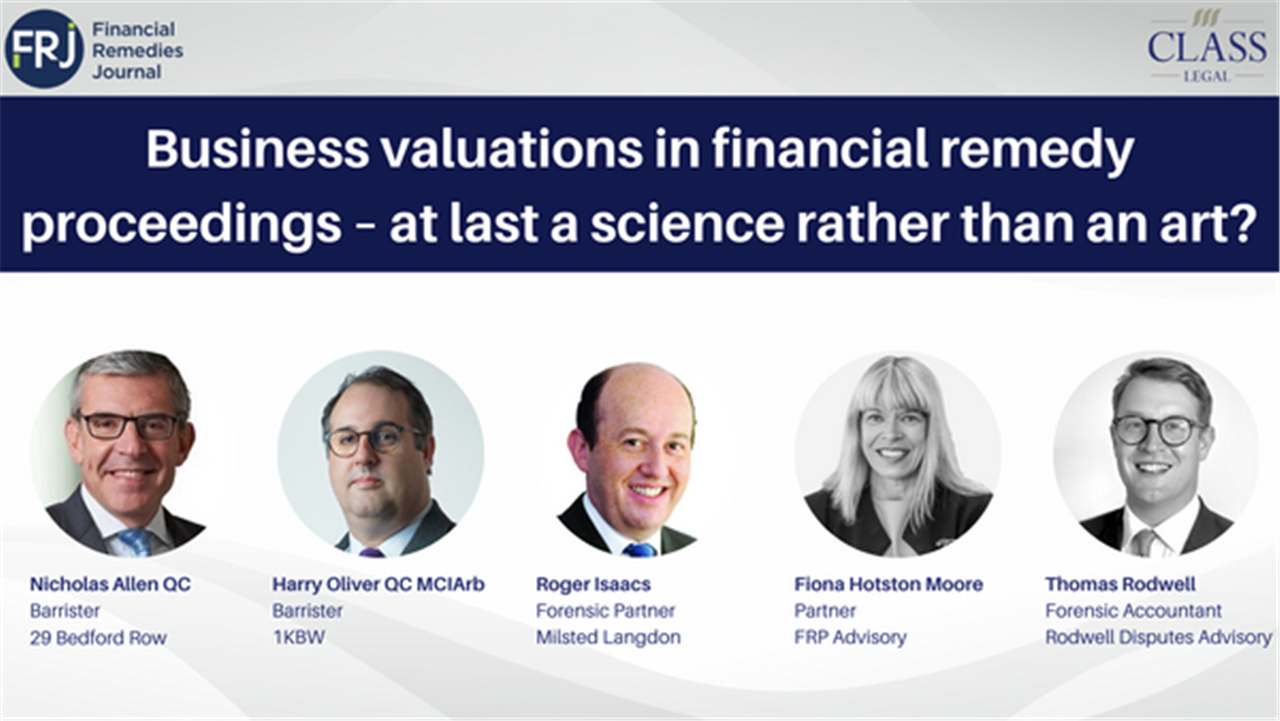 Watch the recording of 'Business valuations in financial remedy proceedings - at last a science rather than an art?' first broadcast on Wednesday 20th July 2022.

In this webinar, chaired by Nicholas Allen QC (29 Bedford Row), Thomas Rodwell (Rodwell Disputes Advisory), Roger Isaacs (Milsted Langdon), Fiona Hotston Moore (FRP Advisory) and Harry Oliver QC (1 KBW) discuss valuation issues including Mltpl of which Thomas is a founder. Can this new software revolutionise the way that valuations are obtained and used in FR proceedings? Is this finally the end of ‘arid, abstruse and expensive black-letter accountancy valuations’?

Barrister and Joint Head of Chambers at 29 Bedford Row (London). Door Tenant at St. Ives (Birmingham). IFLA arbitrator and PFDR/ENE tribunal. Appointed Queen’s Counsel in 2018 and a Deputy High Court Judge in 2021 (previously Recorder of the Family Court from 2016). Bencher of the Middle Temple. Editor of the family law chapters of Foskett on Compromise (Ninth Edition, 2019). Regular lecturer including at the Judicial College.

Harry took silk in 2020 having been the leading finance junior for many years. In 2018 he was awarded Family Law Junior Barrister of the Year, by Chambers & Partners. He previously won it in 2013 and was shortlisted in 2012. No other barrister has ever been nominated three times and won the award twice.

Harry specializes in complex divorce, financial remedies and claims for provision for unmarried parents under Children Act 1989 Schedule 1. His cases usually involve high and ultra-high net worth individuals (including up to £3bn). He has particular experience with complex corporate, trust, tax and business valuation issues, in the UK and overseas. He represents individuals, trusts, trustees and companies and has advised on overseas divorces including in Jersey, Guernsey, Cayman, Gibraltar, Hong Kong and Isle of Man. He also advises commercial funders of litigation.

Fiona specialises in share and business valuation cases with particular experience in the Family Court. She also has considerable experience in commercial disputes, tax disputes and professional negligence matters.

Roger Isaacs is an award-winning chartered accountant and experienced expert witness. He is a partner in Milsted Langdon LLP, a regional accountancy practice with offices in London and the South West of England. Roger lectures and writes regularly on accountancy related topics in the context of separation and divorce.

Thomas Rodwell is a forensic accountant and business valuation expert who provides economic and financial advice. He is a member of the Institute of Chartered Accountants in England and Wales and the Society of Share and Business Valuers. He is regularly appointed as an expert to opine on issues of finance and valuation and is the founding member of Rodwell Disputes Advisory (RDA), a leading boutique advisory practice for commercial and matrimonial disputes.