DR Corner: Book review of (Almost) Anything But the Family Court 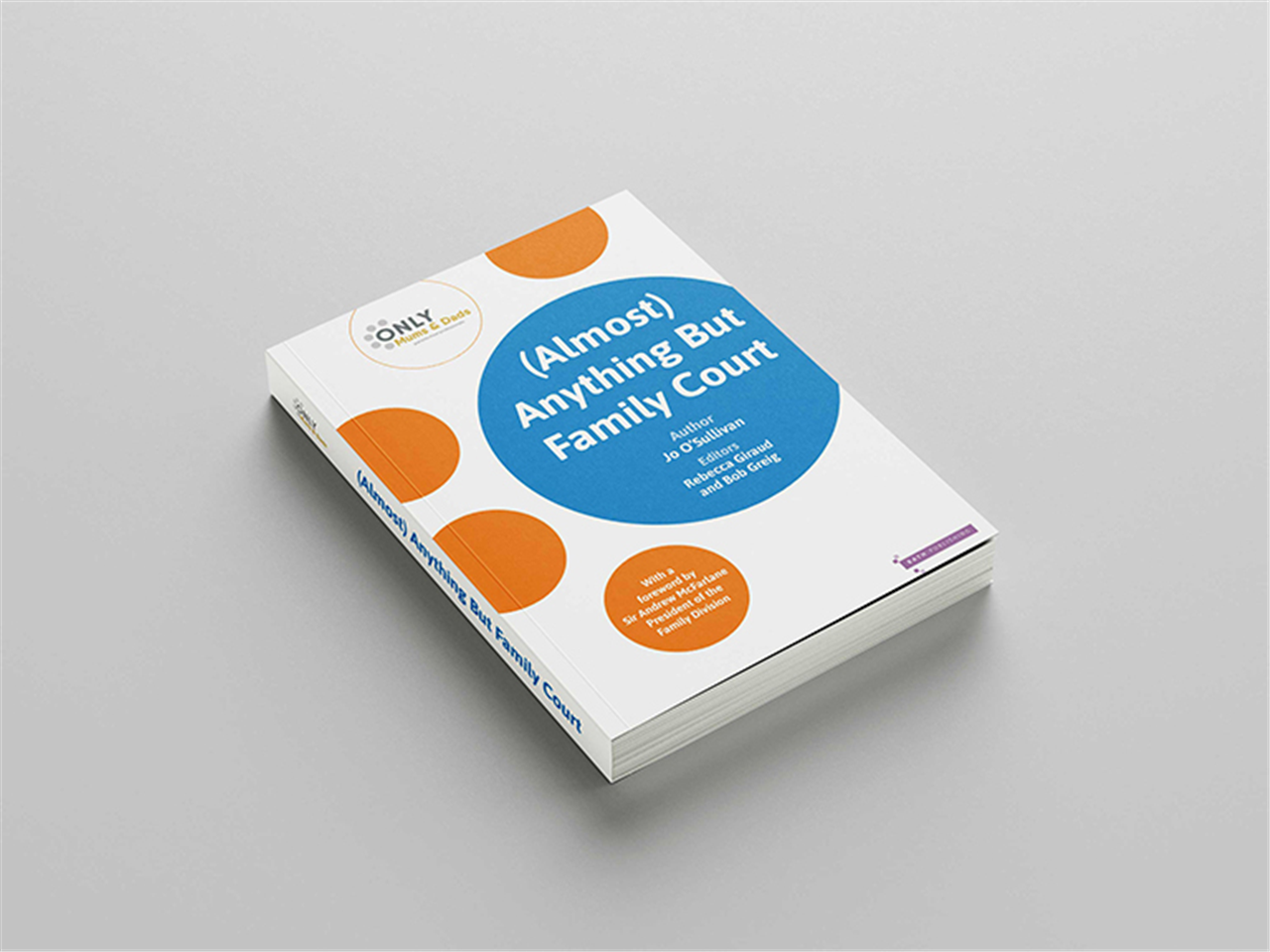 Earlier this year, my good friends at Only Mums and Only Dads, Rebecca Giraud and Bob Greig, with a stellar author in the ever-fabulous Jo O’Sullivan, launched (Almost) Anything But Family Court at the Resolution national conference. The President, Sir Andrew McFarlane, was present in person to reinforce themes which feature in his Foreword to the book:

‘… issuing proceedings in the Family Court should be the last resort, rather than the first. [A]lmost any other avenue … is likely to be quicker, much less stressful and less expensive …’

‘The arrival of this clear and very accessible book represents a most valuable and significant addition to the available resources … Oozing with common sense and emotional insight, the available options and various routes are explained in non-legal language.’

As practitioners, we all know this. Yet good quality resources which demystify things have long been lacking, and those navigating separation and divorce have often been left confused. There has been a tendency to put different processes into silos, without providing guidance as to how someone may find their way seamlessly to resolution using a different approach if, for example, mediation founders. There has also been a habit – perpetuated by government policy – to put mediation (and just one model of mediation) at the heart of people’s thinking, so that they are ignorant of the wealth of other non-court dispute resolution (NCDR) approaches available (such as early neutral evaluation, collaborative practice, arbitration and, indeed, the different and developing models of mediation).

The choice between court and non-court options has often felt binary. How often do we read resources which demonise court completely and make people feel like a failure if they end up there and, at the other end of the spectrum, pieces written by dyed-in-the-wool litigators who seem almost suspicious of NCDR and all it represents, and signpost clients straight to court?

So when I came to read (Almost) Anything But Family Court, it represented a refreshing change in approach.

In speaking to the editors, I discovered that producing a resource like this had been on their to do list for about 4 years and it came to a head when they saw a tweet about hybrid mediation and wondered what that was. They reasoned that if they did not know, there was a very good chance the general public (who contact Only Mums and Only Dads in their thousands every year looking for support) would not know either. That thinking was confirmed as other new terms – ‘Med-Arb’, ‘Arbitration’, ‘Private FDR’ – came to the fore. During those conversations, an email arrived from Jo O’Sullivan asking if they could produce a resource for the public to outline all the alternatives to the Family Court. As Bob and Rebecca said to me – ‘Ha! That will teach her …’. Jo agreed to write the book on two conditions, that she would only do so free of charge and that any royalties coming her way would be put to support the work of the Only Mums and Only Dads’ not-for-profit organisations. Discussions, drafts, layouts, what to put in and what to leave out started within days.

What a brilliant book has resulted. The clear message that permeates it, as trailed in the editors’ introduction, is that, ‘No matter how daunting and difficult, reaching an agreement with your ex outside of the family courts that works for both of you will be the best possible outcome for you and your family’. Jo herself stresses that this is first and foremost a book written for the public, for those contemplating or navigating a break-up. The important secondary audience is family law professionals (and, no doubt, others helping people to navigate separation, be it therapists, family consultants, financial neutrals and the like), to help guide clients and for it to prompt discussion. However, given that we know that since the advent of the Legal Aid, Sentencing and Punishment of Offenders Act 2012 almost 10 years ago, around 80% of private law cases in the courts involve at least one unrepresented litigant, and that the online divorce portal and no-fault divorce have driven ever more people to start their process without accessing any legal advice, it is vital that the book speaks first and foremost to the public.

Importantly, while the focus of the book is to explain in layman’s terms the detail of all of the non-court processes known at the time it was written (‘at least 12’), the first chapter covers domestic abuse and ongoing safeguarding. There is a helpful description of what constitutes domestic abuse and the types of relationship it may cover, and an important checklist to help someone consider whether there has been domestic abuse in their relationship. The message is clear (and made upfront in the book) – that the processes the author outlines rely on someone being able to speak and be involved freely in all the discussions and decisions, and not being at risk of duress or other harm. If that is not the case, then the reader is cautioned against NCDR processes and signposted to available resources.

Sensibly, later on, the book also explores the circumstances in which legal steps may be required, broken down into ‘protection of assets’ and ‘protection of the person’. In that context there is a helpful description of the different types of support available; and an invaluable list of tips about how to choose your lawyer and how to manage your relationship with them (including their involvement in the different NCDR processes).

The meat of the book, then, is the ‘sorting things out’ section. Twelve options away from court are dissected – what each one is, the pros and cons and the circumstances in which the particular process may be used. The spectrum runs from DIY/kitchen table discussions, through different models of mediation, collaborative, round-table meetings, arbitration, med-arb, one lawyer two clients, online, early neutral evaluation and private financial dispute resolutions. This is distilled into a really helpful table which summarises the options and sets out what the team involved may look like in each scenario (a really commendable feature of the book is its focus on different professionals who may be involved, not just lawyers). For me, one of the best things about the book is the way in which it seeks to break down the walls between the different process options, which (speaking as a mediator who often struggles easily to help clients transition into arbitration if any element of mediation has failed) have for too long existed. In the summary table, Jo includes a ‘process mixes well with’ column to describe the possible mix-and-match approach which could be adopted, borrowing from what she sets out in the chapter. As dispute resolvers, it is for us to do more work on how we make this happen in practice.

The book ends with some typically useful pointers for members of the public – detail about parenting plans and sorting out the finances; details of ‘who’s who’ in the team they may work with; and a glossary of legal terms and signposting to other resources/organisations.

Rightly, the book has had a warm reception from legal and other professionals who work with separating couples. What is key is to get the word out to members of the public. Getting the book ‘out there’, Bob and Rebecca tell me, is a challenge and it is hoped that lawyers and mediators will signpost clients to it. From Bob and Rebecca’s perspective, the President’s endorsement is crucial in the messaging they want to cascade down. The book now has the most senior family judge, and an experienced and respected solicitor in Jo O’Sullivan, and two parent organisations saying to parents, ‘don’t go to court unless you really have to’. There is power in that unity.

From my perspective, I have no hesitation in highly recommending (Almost) Anything But Family Court to readers of the Financial Remedies Journal. While we should all be giving two copies to each of our clients so they have one for themselves and one for their soon-to-be-ex, you should buy a copy for yourself as well. I would be very surprised if you did not learn something new from it yourself and, given the ongoing (and much-needed) push to divert more cases away from the Family Court, we are all well-advised to brush up on our knowledge and understanding of the new and rapidly evolving models of dispute resolution. Exciting, innovative times indeed.